This essay is part of our summer series called “Running for His glory,” focusing on the intersection between running and faith. Mark is a new friend, whom I met through an online writers community called Hope*writers. I’m grateful for his honesty and example of perseverance in this story. He shares about how running up hills literally and in life has helped him on his journey.

I dropped my bike and ran toward the scene of the accident. My son was lying on the ground, his bike and older brother beside him. A woman was there also, her parked car only feet away. She looked up as I approached.

Had he been hit?

Conscious and still breathing. Good. He had struck a pothole and skidded across the pavement on his wrist. I looked at the swollen and badly disjointed arm and took a deep breath. I thanked the woman for checking on my son then dialed my wife’s number.

My wife. She had just moved out of our apartment. The love we had found over 13 years ago had been steadily eroding, and I felt powerless to shore it up. It was Labor Day weekend, days before I was to start my new teaching job and only a few short months since we had left the mission field.

“Oblique fracture,” said the doctor at the Emergency Room. “We’ll need to sedate him before setting the bone right.” Fractured, I thought. A morbid metaphor for our lives at that moment.

I had taken up jogging as a teen and never looked back. Now, as a divorced dad of three, running has proven to be medicine for my body, mind, and spirit. I remember those days during the separation and divorce when my emotions boiled within me and I found myself at times sprinting down the lane to let off steam. The intensity of those emotions have cooled with the passing of time, but still I run. I run every week through that cemetery. Like the plaster cast which encased my son’s broken arm, it has become a place of healing.

Just inside the entrance to the cemetery is a set of stone steps leading up a hill to an overlook. I often run those stairs first. I like the strain it puts on my body, knowing that it will result in greater strength.

“Not only that, but we rejoice in our sufferings, knowing that suffering produces endurance, and endurance produces character, and character produces hope, and hope does not put us to shame, because God’s love has been poured into our hearts through the Holy Spirit who has been given to us.” (Romans 5:3-5, ESV)

The top of that hill has become a sacred place for me. I spend a moment in reflection there. I  pray for others and tell God what’s on my heart. It’s a place to remember His faithfulness to me and to renew my trust in his ways. In the whisper of wind through the pines, I hear the voices of saints gone before, telling me God is worthy, urging me to press on.

“We have all these great people around us as examples. Their lives tell us what faith means. So we, too, should run the race that is before us and never quit.” (Hebrews 12:1a, ERV)

The cemetery was also the place where I began to go off track. Two years after the divorce, I met a woman. In many ways she seemed a great match except we didn’t share a common faith… yet, I told myself, but she’s so close to trusting in Jesus. We enjoyed running together, and our relationship quickly progressed. I stood with her one summer afternoon on top of that hill and told her she had my heart. But even as I said those words, I felt an unease deep within.

In the weeks that followed, God’s Spirit relentlessly worked on my heart. He used A. W. Tozer’s “The Pursuit of God,” various passages of Scripture, and the wounding words of love from friends to convict me that I was veering from the path God had for me. Before summer’s end I broke off the relationship and gave my tear-drenched heart back to God.

“We should remove from our lives anything that would slow us down and the sin that so often makes us fall.” (Hebrews 12:1b, ERV)

There is a final hill, and it comes at the end of my run, just before I reach home. It’s the hardest climb. I often feel spent as I approach it, but there’s a phrase I repeat to myself as I get closer: “Run the hill.”

I put one foot in front of the other and strain for the top without thinking about the distance left to get there. Endurance. Perseverance. This, for me is the most important carry-over from running to my personal life. The learned fortitude to stay the course.

Yet inner strength does not always look like running; it sometimes looks like walking or even crawling on all fours. When Jesus faced Calvary’s hill he did not run it. He stumbled up it, bearing the weight of a cross loaded with our sin and shame. Outwardly he was never weaker; inwardly never stronger. He had built that strength through innumerable acts of surrender and obedience, persevering in the path the Father planned for him.

“We must never stop looking to Jesus. He is the leader of our faith, and he is the one who makes our faith complete. He suffered death on a cross. But he accepted the shame of the cross as if it were nothing because of the joy he could see waiting for him. And now he is sitting at the right side of God’s throne.” (Hebrews 12:2, ERV)

What hill are you looking up at right now? For whatever reason – perhaps unknown to you – the Father has called you there. Satan may be taunting you; daring you to try another step; tempting you to take an easier way. But look around you: Faithful witnesses are cheering you on.

Look within: The Spirit that cries “Abba, Father” is there saying you can trust God’s heart.

Look up: At the top of that hill stands One who has gone before you. He is Jesus the Christ. He is your Hope. He is your Strength. He is your Home. Set your gaze on Him as you take one step and then another. Run, walk, crawl that hill for the Joy that awaits you. 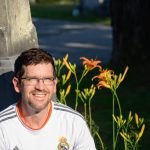 Mark developed his love of running in Zimbabwe where he was born to missionary parents. He now lives in New Hampshire with his three children and works at an inner city school, teaching English Learners. Connect with him on Facebook at Mark W Jackson.

*Read the other articles in the “Running for His glory” series:
-In “When God brings you full circle,” Dorina describes how sometimes we have to return to particular places, relationships or memories in order to measure just how far we’ve come. She learned this on a trail race she ran a few times in different seasons of life.
-In “How running found me,” Danielle E. Morgan shares her story about how running found her as a young adult and has shaped her health, her mothering, and who she is in Christ today.
-In “Battling negative self-talk,” Kristy Wallace runs us through how she reframes her internal dialogue using scripture. She runs and meditates on specific passages throughout the week.

-In “Discovering running as soul care,” Erin Reibel talks about how she grew into loving running as a busy mama. She consider it an important soul care practice.
-In “How I started running for all the wrong reasons,” Gloryanna Boge shares about how she started out running for all the wrong reasons, but God redeemed it for her.
*Dorina and her husband Shawn recently started the Glory Chasers running group on Facebook. They offer up courage, coaching, and community for Christian runners. If you’re a runner or know one, pass it on.
Share119
Tweet
Share
Pin
119 Shares

We have been using our weekends during this pandemic as a time to seek restorative rest. Restorative means “having the ability to restore health, ...

Open
We have been using our weekends during this pandem

Somehow in the middle of a pandemic, my hubby @shawnyoungruns and I completed final edits on our first joint project.
.
This September we are ...

Open
Somehow in the middle of a pandemic, my hubby @sha

I had the privilege of chatting with @mrsmonicaharris on The Sisterhood Effect podcast this week about the story of Esther and how she stood up to ...

Open
I had the privilege of chatting with @mrsmonicahar

“For he came to be a witness, to point the way to the Light of Life, and to help everyone believe. John was not that Light but he came to show who ...

Open
“For he came to be a witness, to point the way t