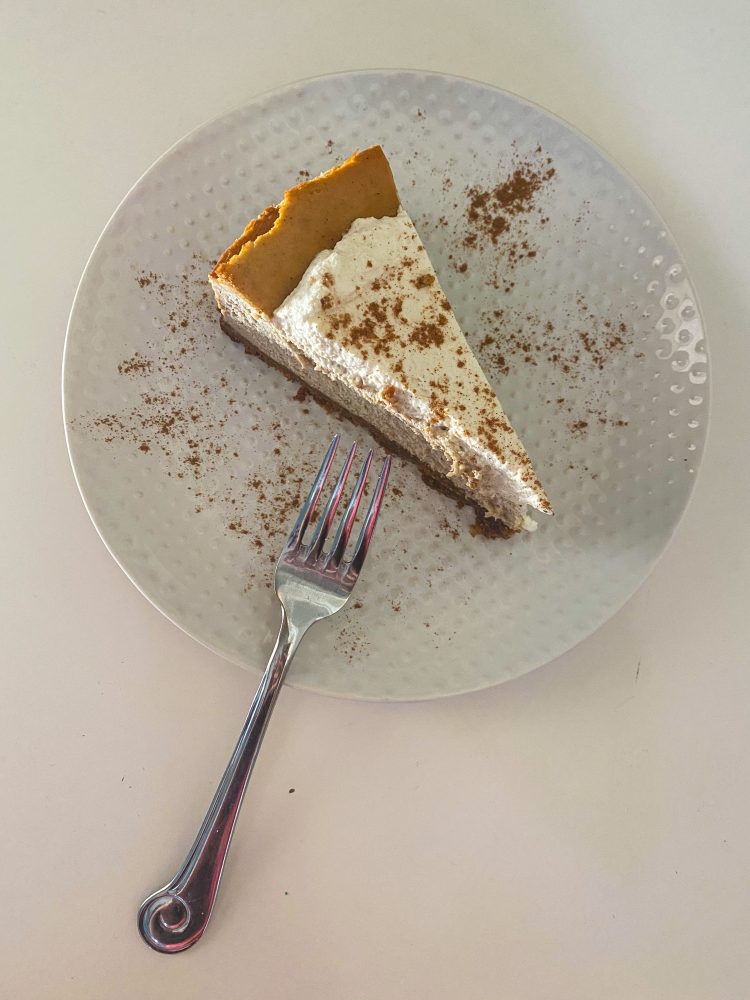 I’m a chai lover. If you haven’t had chai, it’s a tea using Indian-inspired spices. The word chai literally means tea. This tea feels very fall to me – full of cinnamon, cardamom and ginger. Everyone mixes their chai a little differently. Chai lattes are very popular and often make the drink list at local coffee shops. My daughters and I have been drinking chai together for years. I have a small group of mama friends, and we lovingly call ourselves the “Chai Sisters.” We raised our babies together, and whenever we gather, we drink chai.

A few years ago, I entered a baking contest at the Big Fresno Fair. My Chai Cheesecake recipe won second place in the Malt-o-Meal Creations contest. The crust was made from crushed cereal made by Malt-o-Meal. I made a couple of cheesecakes to perfect the crust and Chai filling mixture. The following recipe was the result, although I tweaked this crust so you don’t have to specifically use that cereal. This cheesecake has half the sugar most recipes require. Instead, the spices mixed with cream cheese give this cheesecake it’s depth and more nuanced flavor.

My family and I had fun heading down to the Big Fresno Fair and watching the judging. Surprise, surprise – 100 percent of the entries were desserts. The judges did deliberate. They announced the winners and my “Chai Cheesecake with Honey Nut Crust” was awarded 2nd place and $50. I was honored to stand next to Pearl, the first place winner. She was the sweetest older lady who was blind and had entered 20 other desserts in the fair as well. Her Raspberry Crunch Pie deserved first!

This Chai Cheesecake has become one of my signature desserts. My daughter Meilani, who fell in love with chai at probably age 4 at a Chai Sister gathering, requested this cheesecake for her 8th grade promotion celebration this week. I happily obliged to make it – mostly so I could lick the bowl.

2. Mix together almond flour or crushed graham crackers, sugar and butter oil in a bowl. Press into the bottom of a greased (round) 9-inch spring form or other cake pan and bake for 10 minutes to set. Remove from oven and cool.

3. Meanwhile, blend softened cream cheese and sugar with hand mixer. Make sure the cream cheese is very soft before you begin. Otherwise, the cheesecake will be lumpy instead of smooth.

4. Add eggs one at a time and blend until mixture is smooth.

6. Pour over crust. Smooth top with a spreader.

5. Bake for one hour. (DO NOT open oven while your cheesecake is baking. This can cause cracks in the top. Resist the urge. You can turn on your oven light and check on your cheesecake. If the top starts to crack, remove immediately.)

6. Remove and cool. Chill at least two hours before slicing.

7. Whip cream and add 1 tablespoon of sugar. Spoon a dollop on top of cheesecake slices with a sprinkle of cinnamon.