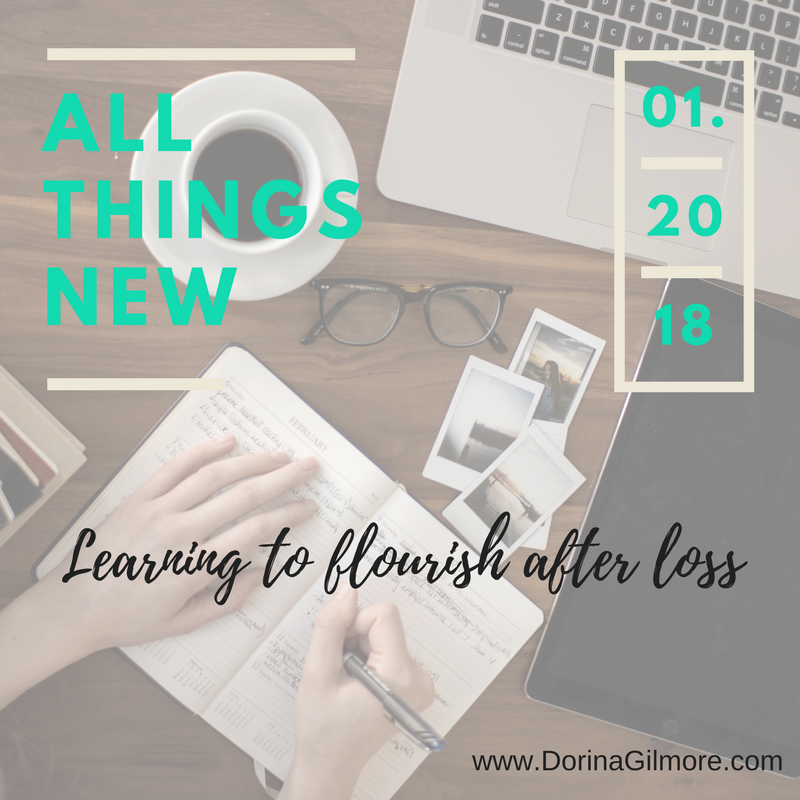 The following is a guest post written by my widow friend, Danell teNyenhuis. I met her through a young widows group in Fresno, California called G.I.G. (Gals in Growth) facilitated by grief counselor Patty Behrens. I hope her story gives you a glimpse of what life after loss can look like. I love the way Danell has embraced her “new normal” and made it her own.

On April 19, 2016, I was a happily married mother of two daughters, ages 17 and 19. I was working at a job that I didn’t particularly love but I had a great life. I had been married for nearly 24 years to the love of my life and we were looking forward to being empty nesters! On April 20, my perfect little world was shattered when a drug-impaired driver hit and killed my husband Patrick, while he was on his morning bike ride.

I’ve written so many things about that day and the days since then. My journey has not been easy but I’ve kept going, and now I’m at a new place in my life. The day Patrick died I was overwhelmed with the outpouring of love and support. Even that first day I felt deep gratitude. I knew right away that the direction of my life would change; I just didn’t know how.

Admittedly, there were , such as becoming more involved with our church, Divine Mercy, and starting my Village of Support group. I try to give myself a break and realize that I can only do so much. God has a plan, and it’s not always exactly what we think it is going to be.

The biggest thing I discovered is that people like to read what I write. I’m told that I am able to put my thoughts into words that help people in some way. The main reason I write is to help with my own healing process. Helping others is an unexpected bonus.

I also discovered that I can remain calm in a crisis and that helping others is also healing for me. As I sorted through the remnants of my shattered life, I decided to focus on the things that gave me joy, including my girls, my family, and helping others.

In September 2016, I enrolled in Grand Canyon University and began an online master’s program in Professional Clinical Counseling. I am on track to graduate in early 2020 if I take one class at a time. Fortunately, my employer was offering early retirement packages. I retired last January so I’ve been able to focus on school. Neither of these things were even on my radar before Patrick died.

Another part of the healing process for me was to make small, gradual changes at home. I went through Patrick’s things at my own pace and did some re-organizing. I had to learn how to do things that were previously his responsibility. I made decisions about the house and yard that he would normally make.

These changes at home have helped my grieving process. When you walk in my home, it’s still the same house, but not exactly the same. I need it to look different because my mind sometimes plays this cruel trick and tries to convince me that it was all a nightmare. I never have to look far for a gentle reminder that he is gone, but I am still here and doing okay.

My husband was full of life and it’s hard to imagine he is gone. Honoring his memory and preserving it is very important to me. I created a Virtual Memorial page modeled after the page a classmate created for his son.

The Patrick’s Virtual Memorial page includes his obituary, eulogy, photos, videos and messages. The page has been visited 13,401 times and that means a lot to me. Patrick was in a bluegrass band, The Steam Donkeys. I have a lot of videos from performances and ones he made of himself practicing. These are stored on his YouTube channel, PatrickT9. The best ones are the ones that have him talking in between songs. They really show his quirky humor.

My blog is my biggest tribute to him. My Life After Patrick started as a way for me to tell the incredible story of how love and community got me through the Worst Day of My Life. Later it became a way for me to remember and share stories of Patrick. Today, it serves as documentation of how I continue to make my way towards my new normal. I was also able to show how well our daughters are doing and their accomplishments. I know he is smiling down on all of us from heaven. 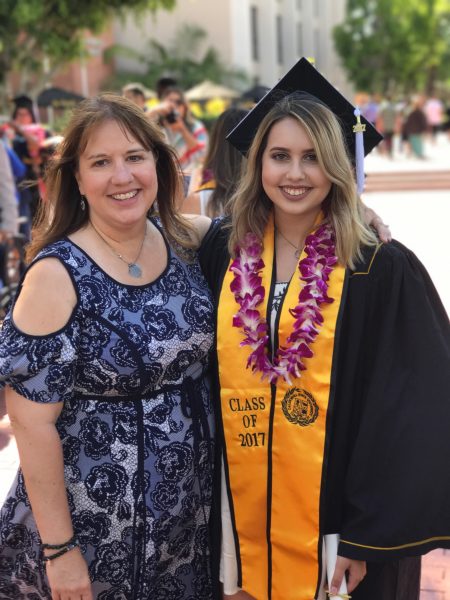 I really worried about my daughters, Sierra and Camille. I should have known their dad was continuing to be present in their lives. Sierra took incompletes in classes after his death, but went on to not only complete them but graduate from CSU Long Beach in three years with honors. Camille graduated from Clovis East with honors and was accepted at UC Davis.

Saying goodbye to my youngest daughter Camille this past September was hard. I wasn’t sure how she would do at school. She has been such a rock through all of this, and I was worried that she hadn’t taken time to grieve. I know it wasn’t easy.

The very first day she joined a Christian fellowship. She quickly developed close friendships. She started attending mass on Sundays – something we had not done regularly for many years. She told me the first Sunday was very emotional, but it felt good. When she is home on breaks, we have gone together. One Sunday I gave her a hug because it was so nice to be there with her. Later she told me that she was feeling her Dad’s presence.

The biggest blessing since Patrick died has been the way our families have come together. I like to tell people that they have merged. Patrick used to get together with his brothers on the first Friday of each month. The first year after he died we continued this tradition and invited both of our immediate and extended families.

My siblings refer to his siblings as brother and sister, and I feel like I have another set of parents. We spend a lot more time together. In fact, my brother took Mom and Pop teNyenhuis on his family vacation! This has helped us all as we continue to grieve.

I also know that Patrick would not want me to be alone. I know there is no jealousy in heaven and if I fall in love again I know he will be cheering me on. I am cautiously venturing out into dating. It’s not easy and definitely a lot different at this age, but I’m giving it a shot.

I turned 50 in December – a milestone that Patrick will never reach. I chose to throw myself a party and took a trip to Disneyland! A little extravagant, but it was great to celebrate with family and friends! My new normal includes taking time to celebrate family and friends as often as possible. I like to find ways to make new memories with my kids! Life is short, and I want to enjoy it. 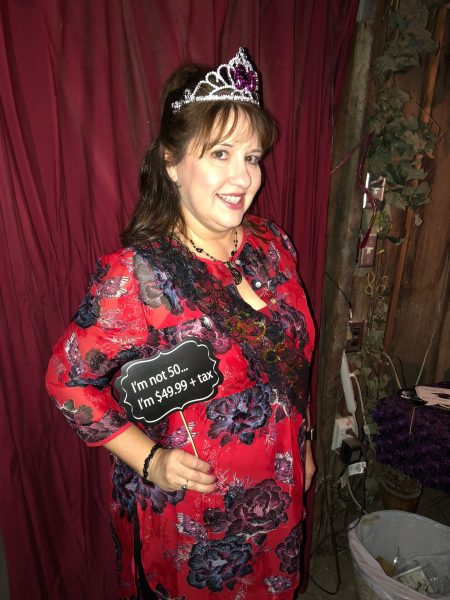 A week before Patrick died the girls and I took him to the Paul McCartney concert on his birthday. I had bought him a laptop for Christmas and he had begun recording himself playing his banjo. The day he died I opened his computer and found a video of him playing Blackbird. I consider it a love letter that he left for the girls and me. These lyrics are meaningful to us:

Take these broken wings and learn to fly

You were only waiting for this moment to arise

Take these sunken eyes and learn to see

You were only waiting for this moment to be free

I would give anything to have my old life back, but I can honestly say I have a good life today. I think Patrick would be proud of me. The three of us have, in our own ways, moved forward and done great things. We have taken our broken wings and learned to fly. We have embraced our new normal! I know God has great plans for all of us. 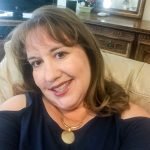 Danell teNyenhuis is the proud mother of Sierra and Camille. She is retired from Aetna and is currently a full-time student through Grand Canyon University, pursuing her master’s degree in Professional Clinical Counseling. She hopes to someday turn her blog stories into a book. Connect with Danell on Facebook, Twitter, YouTube and Instagram as Danellt9. 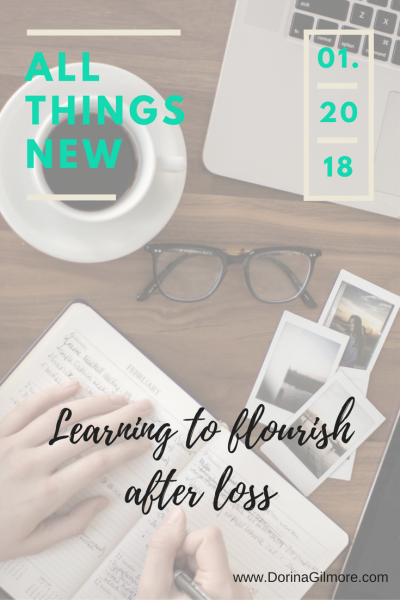 **This post is part of a January series called “All Things New.” Check out the other stories in the series and Dorina’s new Bible study, Flourishing Together.